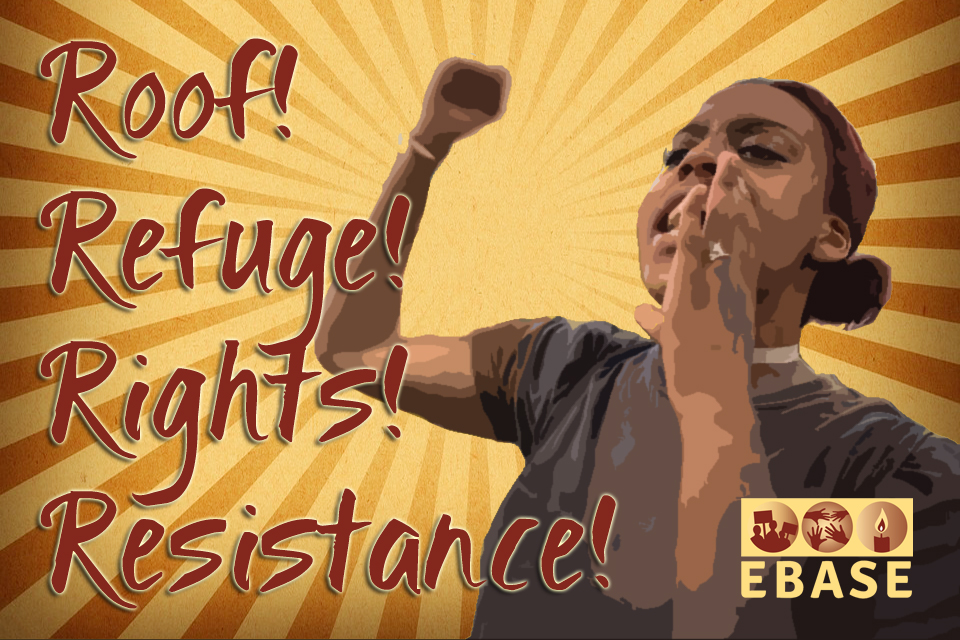 EBASE convenes coalitions of community, labor, and faith organizations to fight for economic and racial justice. We collaborate on the Resistance through campaigns that advance Rights, Roof, and Refuge for all. Our work lifts up low-wage workers, people of color, immigrants, formerly incarcerated folks, and grassroots leaders. The best Resistance is a good offense: not only protecting our communities from attacks, but advancing policies that lay the foundation for the world we’d like to live in. EBASE is setting the pace in the East Bay and modeling change for California and the nation.

Rights: Everyone Deserves a Good Job

We all have the right to not just a job, but a good job that allows us to afford housing and to raise our families with dignity. The East Bay economy is booming, yet too many people still live in poverty because good jobs are inaccessible.

People of color, especially Black folks affected by mass incarceration and immigrants living in fear of deportation, are often locked out of stable employment. And more and more companies skirt labor protections by hiring workers on a temporary basis, or as “subcontractors.”

EBASE is committed to raising the floor on low-wage work by fighting for living wages, paid sick days, fair scheduling, wage theft protections, limits on exploitative temp jobs, and equal protection for subcontracted workers. We fight with formerly incarcerated workers for a fair chance in hiring by securing “Ban the Box” policies, as well as with immigrants for Sanctuary Workplace agreements. Learn more about EBASE’s campaigns for good jobs & workers’ rights.

Access to housing is essential to people’s well-being and sense of belonging. No one should have to spend hours commuting to a job that barely pays for gas, and people should be able to live where they work. Yet, the skyrocketing cost of housing is forcing working families and people of color out of neighborhoods where we’ve lived for generations. Instead, new development projects cater to tech and those seeking luxury condos.

Equitable development means not just affordable housing, but also protections for renters, better access to transit, and a healthier environment in general. EBASE is organizing from Oakland to Concord to prevent the displacement of longtime Black and Brown residents.

Public land must serve public good, so we advocate for affordable housing, good union jobs, and green development in the development of public parcels like the Coliseum, the former Oakland Army Base, and the Concord Naval Weapons Station. Learn more about EBASE’s campaigns for fair development.

Our jobs, homes, and neighborhoods should be sanctuaries, places where people can live free from fear or anxiety. Regardless of where someone is born, we should be able to plant roots in the East Bay and make a home.

However, the Trump administration has heightened the threat of detention and deportation, which tears apart families and undermines social trust. Many immigrants live in fear that we will be targeted in our neighborhoods and workplaces.

EBASE is a driving force in the immigrant rights movement, convening key coalitions in Alameda and Contra Costa Counties. We fight for “sanctuary city” policies that prevent local agencies from collaborating with ICE. We call out the racist practices of county sheriffs and develop rapid response networks to prevent deportations.

Supporting all of our work (particularly for immigrant rights) is the Faith Alliance for a Moral Economy (FAME), our faith-rooted organizing program. FAME offers a moral lens to these campaigns, envisioning a world in which migration is a human right and no one has to live in poverty or fear. Learn more about EBASE’s campaigns for immigrant justice.

The 2016 Election drastically altered our political landscape. Though racism, xenophobia, and economic injustice are not new, they have been given free reign under Trump. Federal rhetoric and policies produce not just a climate of fear, but tangible harm for many in our communities. EBASE is a member of the steering committee for Bay Resistance, which not only fights the Trump Administration’s policies, but aims to create positive long-term change.

Through all of our coalitions, we tap into the larger national movement of low-income workers, immigrants, and community members that are together resisting the forces of exploitation and hate. In all we do, the Faith Alliance for a Moral Economy provides grounding as well as prophetic witness of a better world to come. Our Resistance is driven not by what we’re against, but by the principles we believe in: Rights, Roof, and Refuge for all.