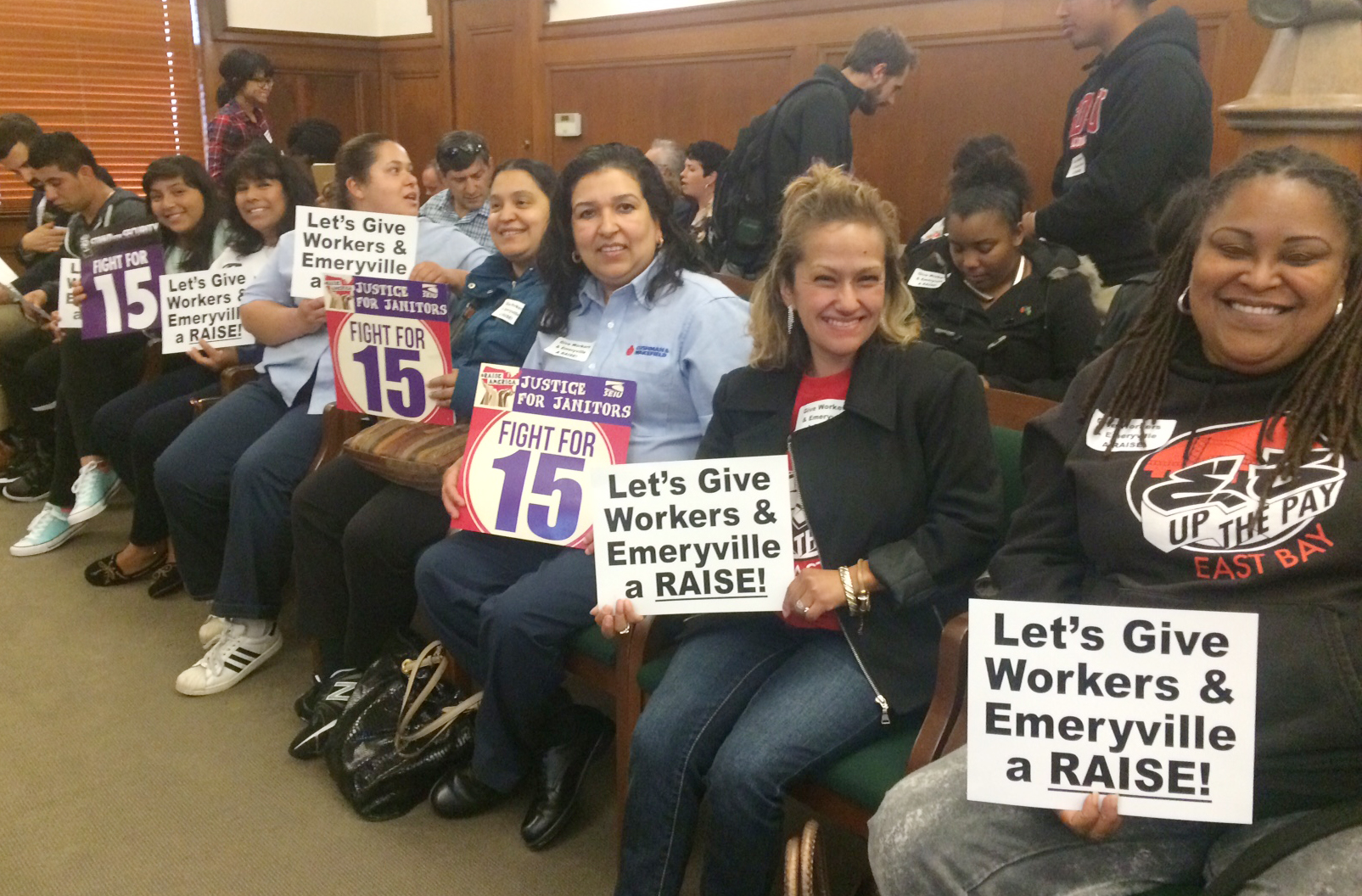 Emeryville has transformed from a gritty industrial city to the “Mall of the East Bay.” And it is now the inspiring beacon of hope for low-wage workers as the City Council voted unanimously to raise the minimum wage to $12.25 with a path to $16, making it the highest in the nation!

The vote was more than just five councilmembers, led by Mayor Ruth Atkin, saying yes to creating better lives for thousands of workers, it represents a tipping point on the minimum wage that we are seeing nationally.

And you’ve been a part of creating that momentum for change.

Two years ago when fast food workers started organizing, $15 was unthinkable, but today it’s unstoppable because of the broad consensus among workers, community members, faith leaders, small business, and our elected leaders.

Take 16-year old Emerald Jenkins – a former EBASE intern who now works at Pak n Save to help her mom with the bills. She said, “I have bills and it’s hard to pay for transportation to get to school so I can get an education. It’s just common sense to raise the minimum wage. Not only would I be able to pay the bills, but if I earn more, I spend more, and that helps everybody.”

Or Ahna Adair, owner of CommonWealth Micropub in Emeryville and CommonWealth Café and Pub in Oakland. She said, ““Our employees are our greatest asset, and If we want to grow our community, we have to make our jobs better jobs. We’ve done it in Oakland, and the sky hasn’t fallen, and now we need to create a regional standard to level the playing field.”

The law will go into effect on July 1st after a final procedural reading of the ordinance on June 2nd. Small businesses will start at $12.25 with a path to $15 by 2018. Big box retail stores and other major employers with more than 55 employees like IKEA – which profited $3.7 billion last year – will rise to Emeryville’s living wage of $14.44 on July 1. The two wages will converge in 2019 at close to $16, and continue upward with annual cost of living increases. All workers will also earn 6 to 9 paid sick days.

We did this together with workers, residents, faith leaders, business owners, and partners including ACCE, FAME, Fast Food Fight for $15, Residents United for a Livable Emeryville (RULE), SEIU 1021, SEIU USWW, UNITE HERE 2850, and United Way of the Bay Area.

Keep your eye out for Berkeley as we build toward the next city to take on the minimum wage!

Error: Error validating access token: The session has been invalidated because the user changed their password or Facebook has changed the session for security reasons.
Type: OAuthException
Code: 190
Subcode: 460
Please refer to our Error Message Reference.