Walgreens and City of Oakland Cave to Community Pressure on Development Project! 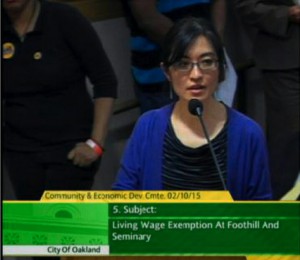 Yesterday, the Community and Economic Development Committee of Oakland’s City Council voted 4-0 to grant the development project a blanket exemption to the ordinance, but faced fierce community opposition.

After controversy arose, Walgreens said that it wanted to be a good neighbor to the community and follow the living wage law. The 1998 law requires companies that receive tax breaks to pay workers $14.10 an hour. Walgreens is a national company which profited $809 million in the last three months and benefited from millions in tax breaks from the City of Oakland for this project.

“This was falsely set up as economic development vs. living wage jobs, but we can have both,” said Jennifer Lin, EBASE Deputy Director. “We have shown that when the community speaks out, we can hold corporations and our elected officials accountable to provide Oaklanders with neighborhood retail services AND living wage jobs to put food on the table.”

By pulling the request for an exemption, the City has set an important precedent. On March 2nd, Oakland’s new minimum wage law will go into effect, which is another law to help workers make ends meet. All employers must pay $12.25 with paid sick days, and the City Council will likely be met with requests for exemptions from corporations.

“The community needs to remain vigilant,” said Jennifer Lin. “When 82% of the voters said they wanted to raise the minimum wage, they didn’t mean that large national corporations would be exempted. What we have learned in the last week is that the community’s voice matters, and when we fight, we win.”