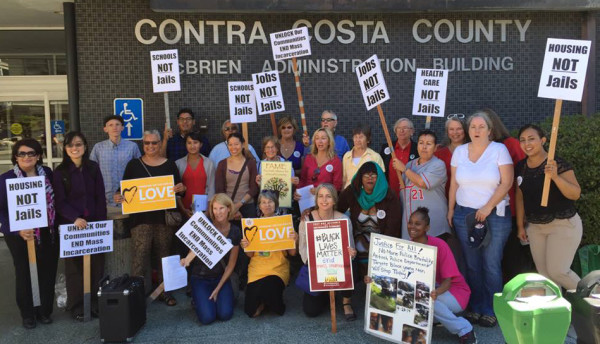 Jake Friedler, a Bay Area native and EBASE intern, tells his inspiring story of his first big win: striking at the heart of mass incarceration and learning the power of grassroots organizing!

The Contra Costa County Board of Supervisors meets in Martinez, a small town at the County’s far northern edge. It’s not accessible by BART, so I was surprised to enter a standing room-only meeting on August 18th. Hundreds of people had come to speak out against mass incarceration and the expansion of the West County Detention Facility.

I’m an intern at EBASE with the Faith Alliance for a Moral Economy (FAME), which has been working against injustices at the West County Detention Facility for years.

In this latest fight, the Sheriff wanted to apply for $80 million in state money and $9 million in County matching funds to expand the jail, saying he wanted to provide inmates with mental health treatment and re-entry services. FAME and our coalition partners questioned the efficacy of treating people behind bars when there remains a desperate need for services out in the community. Folks from Richmond spoke about gaps in housing and education as systemic preludes to crime. Nurses expressed outrage that the County might allocate $9 million just months after the only public hospital in that region closed.

Collectively, we demanded to know: where are the County’s priorities?

At the Board of Supervisors meeting, we groaned out loud when more than 70 people requested to speak on the jail expansion, but inside, I was glad: public comment would show the diversity of the opposition we had stirred through weeks of calls and emails. It would be broadcast to the County by the reporters in the room, many of whom I had personally invited to FAME’s press conference on the issue just days before.

For over three hours, the podium was occupied by impassioned clergy, nurses, attorneys, mothers, and children pleading for better ways to spend that $9 million of taxpayer money. I couldn’t fathom how the Supervisors could possibly support the expansion after watching so many of their constituents offer heartfelt and informed testimonies.

Could they really ignore this overwhelming chorus of community voices?

In fact, they did. When public comment ended, the first three Supervisors leaned over their microphones and explained why they supported the Sheriff’s plan. They barely responded to our claims, as if we hadn’t said anything at all. The Supervisors used phrases like “taking care of our inmates” to claim the moral high ground, but what I heard was, “you residents just don’t know what you’re talking about.”

The fourth Supervisor, John Gioia, represents Richmond, where the West County Detention Facility is located. He had previously told us that he might vote for the Sheriff’s plan. It was an unexpected coup when he voted “no” – and the crowd went wild!

The other Supervisors accused him of “bowing to the pressure in the room,” but I simply saw democracy functioning as intended: an elected leader actually voted in favor of the people.

By some kind of miracle, Gioia’s lone dissenting voice was enough to stop the expansion. With one supervisor absent, and a 4-vote supermajority needed, the $9 million in matching funds were denied. Though the Sheriff will still apply for State funds, his application is severely weakened by his County’s refusal to pay the necessary 10% match.

Since the vote, everyone at EBASE has been congratulating me. I’m beginning to see how this victory is rare, but critical. Without our resistance, the Sheriff’s plan would have moved forward. But because our weeks of organizing created “pressure in the room”, we swayed the one Supervisor we needed to deal a blow to the behemoth of mass incarceration.

The Sheriff hopes to expand this jail while voters want to invest in alternatives to incarceration. Less than one year ago, voters in Contra Costa County approved Proposition 47 by a margin of 66%, demonstrating a strong mandate to move away from jail sentences for many offenders.

Additionally, people across the country are crying out for racial justice and less imprisonment. What we need is a radical re-envisioning of our approach to criminal justice – not more jails.

Following years of realignment and reform, Contra Costa County jails currently have a 33% vacancy rate. Out of the 1,096 beds at the West County Detention Facility, 491 are unused, a vacancy rate of 44%. Though the state has requested proposals “realizing only a minimal increase of capacity,” the Sheriff’s proposed expansion would open 416 new beds at the West County Detention Facility without a promise to permanently close an equivalent number of beds elsewhere – a 21% increase in the County’s total housing capacity.