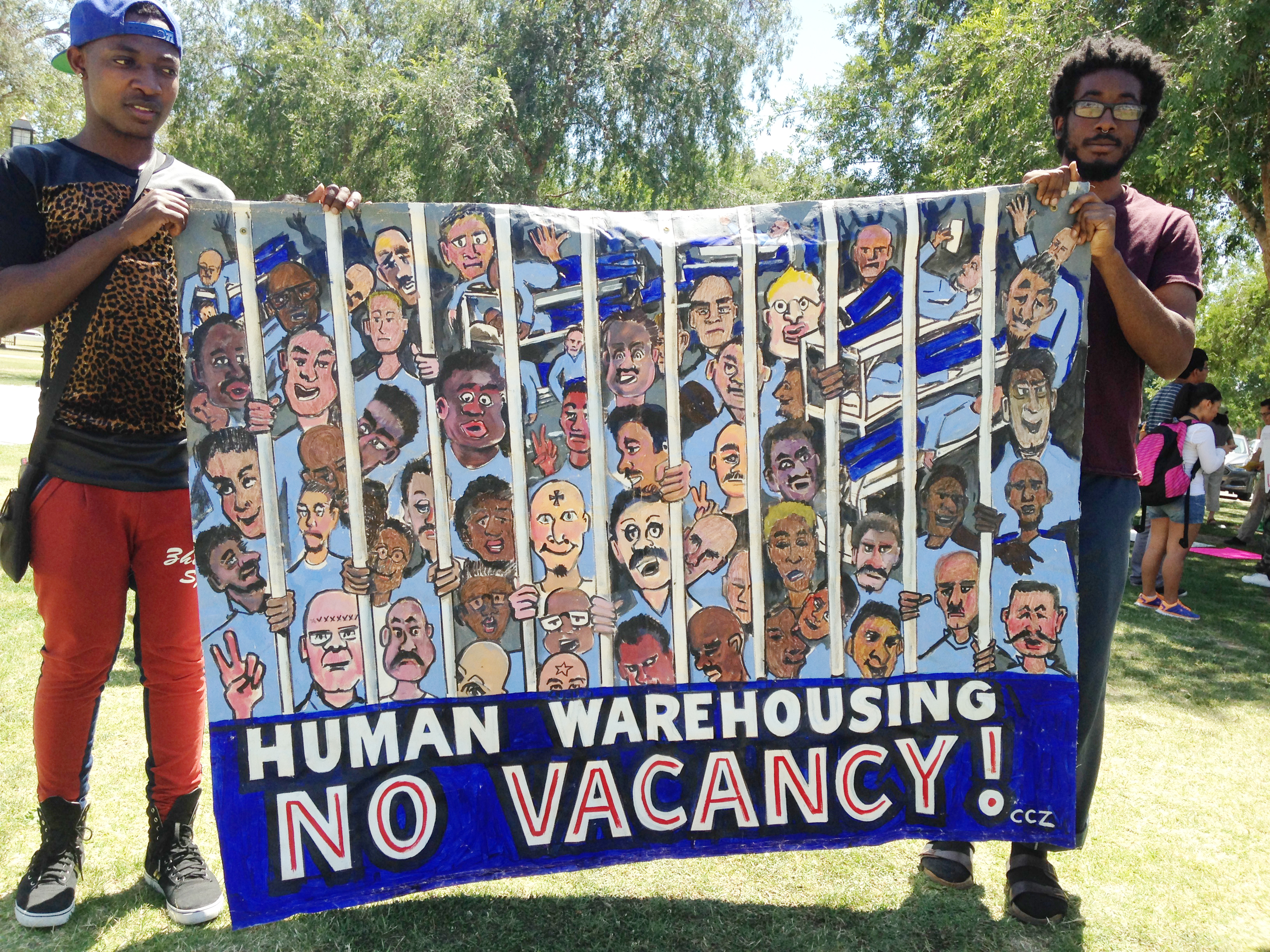 Recently, a ground-breaking Caravan to Free the People embarked in the early morning dampness from the Oakland jail and headed to the Mesa Verde Detention Center in the parched city of Bakersfield where immigrants are also being warehoused.

The caravan was led by the Black Alliance for Just Immigration (BAJI) which lifts up the lives of black immigrants and exposes the ills of the prison industrial complex, including the cancerous expansion of the ICE and immigrant detention apparatus. EBASE’s Faith Alliance for a Moral Economy (FAME) chartered a bus and joined the convoy of seventy Bay Area folks to protest the recently-opened center.

Immigrant detention centers suck billions of our tax dollars to warehouse and abuse undocumented workers and refugees caught up in the broken bureaucracy of U.S. “Homeland Security.” Like the prison industrial complex responsible for the mass incarceration of U.S. citizens, the immigrant detention system is also largely run by for-profit corporations.

On the bus down, we prayed together, shared stories, made new friends, and discussed the realities and remedies of the current system of immigration and detention. There was a palpable sense of camaraderie, mission, and determination to grow this movement and to boldly confront this system that enslaves so many.

The youngest member on the caravan was an 18-month old toddler named “Esperanza”, and the eldest was just over eighty and had been persecuted in Nicaragua and fled to the U.S. over fifty years ago. In the middle were youth from Richmond with their pastor Rev. Keys, a retired fire fighter from Castro Valley, a high school teacher from San Francisco, a formerly incarcerated student at UC Berkeley and advocates with Asian Americans Advancing Justice.

We were met in Bakersfield by cars and vans filled with activists and together, we sent a powerful message against mass incarceration and detention. We drew a line in the sand against the profiteering and abuse of this industry that locks up primarily low-income people of color. And as people of conscious, we stood up for the growing a class of human beings who are excluded from the life, liberty, and the pursuit of happiness that began our nation.

As long as people are disappearing into Homeland Security dungeons, FAME will continue to fight until our economy becomes just and equitable for everyone. We hope you join us in this crusade for liberation and stay tuned for upcoming actions.

The caravan was in collaboration with the National Day Laborer Organizing Network’s Chant Down the Walls and a multiracial network of Undocumented Youth, FAME, Immigrant Rights Activists, African American Community Members and others who successfully organized for the release of Kwesi Amuzu, a Ghanaian immigrant who had been held in indefinite detention for over a year. He was released from Mesa Verde just days before the caravan and spoke at the rally.