I’m an Immigrant and Mom: Join Me in Fighting Hate 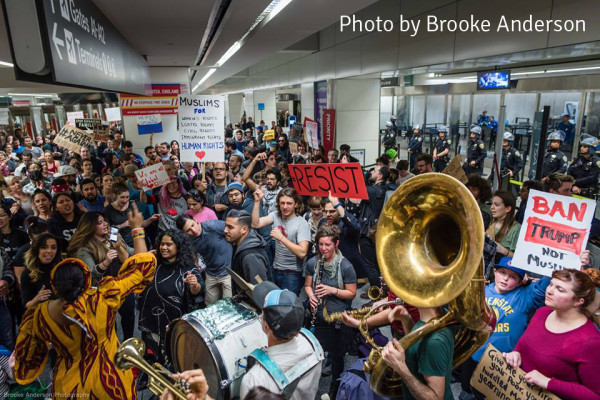 Like many of you, I was one of the tens of thousands of people at airports across the country protesting Trump’s ban of refugees and immigrants from seven Muslim countries.

As I held my sign at SFO, I thought about how my family emigrated from Taiwan through that very airport when I was two years old. It was only a generation after the Chinese Exclusion Act – a law prohibiting Chinese immigration – was repealed.

I can’t imagine the fear the detained travelers faced after Trump’s hateful executive order. Newcomers were stopped right at the doors and prevented from joining their families, beginning their studies, or escaping persecution and death in their countries of origin.

However, the steamroller that is Trump’s hate-filled agenda stopped with our growing national resistance. Together, after two days of protests, we won the release of the detained travelers. And we will be victorious again if we continue to speak up and show up.

There are also battles that we may lose – such as the confirmation of Betsy DeVos for Secretary of Education. However, we must continue to stand up to her war against public education.

Like Trump, DeVos is a billionaire who doesn’t believe in public education and lacks basic knowledge about the issues students and teachers face.

As a parent of a kindergartener in public school, my child should not only be learning math, history, and science, but also respect and a sense of community. How can he learn that when Trump and DeVos, supposed leaders in our country, project hatred and division on every level?

There’s another way. There’s another world. And it’s ours. We showed the world what can be done when we fight back. Let’s not only oppose Trump’s agenda, but work toward the community that takes care of us all.

P.S. Sign up at bayresistance.org to get text alerts or like the Facebook page so you know the moment local actions are called. Bay Resistance consists of dozens of organizations working to Resist the Trump agenda and create a strong social, racial and economic justice movement for years to come.